Considering the size of its display, the Samsung Galaxy Note 8 can be the perfect driver companion. Any navigation app looks great on the screen, not to mention that you can use it as a music player or, why not, with Android Auto. Hey, who said that phablets aren’t awesome?

However, in order to use it for all these, you need a car mount. Nobody should use a phone without one while driving, by the way! And yes, you guessed it, this is what we’re talking about today.

Since there are a lot of models available, with various features, we took a careful look on Amazon and selected only those which we consider worth your money. After all, you don’t want any cheap models, not able to hold your phone firmly and falling from your windshield (or from where they’re mounted) all the time.

Without much further ado, these are the best Samsung Galaxy Note 8 car mounts!

NOTE: Most of these models are universal, fitting a lot of phones, not just the Note 8, so don’t be surprised if you see other models in the images next to the descriptions. 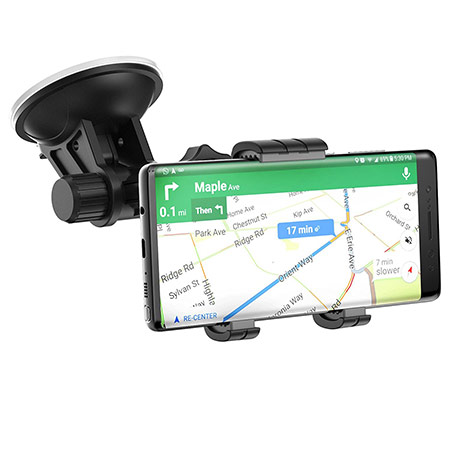 Let’s start our list with an adjustable model, featuring a low profile mount. Our number one pick is the Encased Fully Adjustable Vehicle Dock. It can maintain a clear driver sight, so it’s safer and less intrusive than other models, with gooseneck mounts. Also, the mount rotates to both vertical and horizontal positions, allowing you to choose the optimal viewing angle.

Let’s not forget about the convenient single-handed design, meaning that you can easily insert and remove the phone, using just one hand. It’s a simple, yet efficient accessory, perfect for those who use their phone as a navigation system and not only. 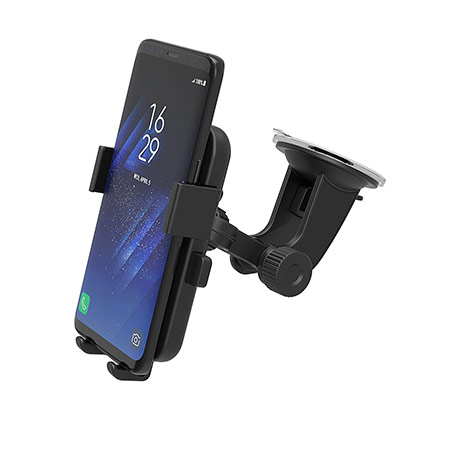 Next in line is the iOttie Easy One Touch XL Car Mount, which, even though it looks basic, is actually one of the most efficient Samsung Galaxy Note 8 car mounts of the moment. It’s fully adjustable, with 360 degree rotation, and it has an easy one-touch mounting system, which locks and releases the phone with just a push of a finger. And this is very important while driving, right?

It has a super sticky gel pad inside, so your phone won’t fall down by any chance. Additionally, the super strong suction cup sticks to your windshield or dashboard immediately. You can restore it to its mint condition, by simply rinsing it with warm water, then allowing it to dry. 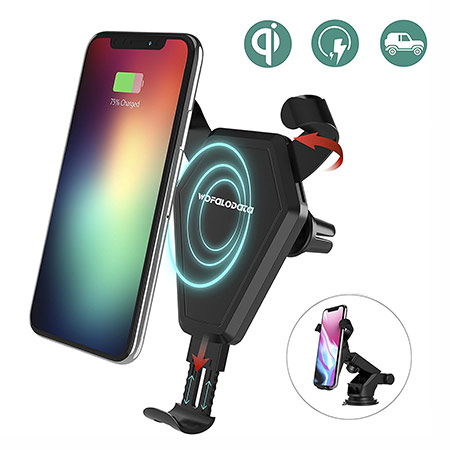 Yes, you got that right. The Wofalodata Fast Wireless Charging Mount is one of those Samsung Galaxy Note 8 car mounts which can refill your battery quickly. And fast, since it’s Fast Charging enabled. By this, you can forget about tangled cords or cables in your car!

You can install this model in two ways: in your car’s vent or using the bracket base. Honestly, we would go for the first, since it helps cooling down the phone while charging. On the other side, the bracket base supports 360-degree rotation, so you can put the phone in any position you want, for a comfortable viewing. The length of the holder is also adjustable! Definitely a model worth giving a shot, especially if you hate seeing cables all over the place, like yours truly does. 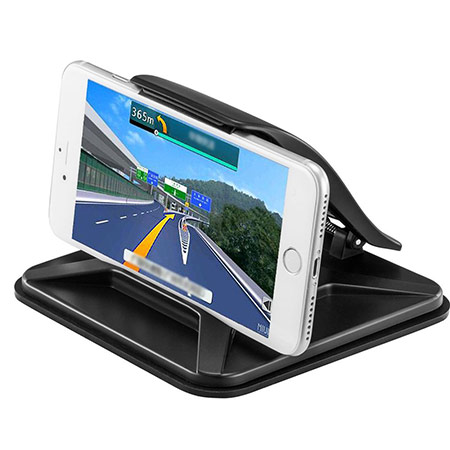 Yet another unusual (compared to most models) car mount for the Samsung Galaxy Note 8 makes it to our top. The Facoon Cell Phone Holder has a triple reinforced mounting system, directly on your car’s dashboard. Specifically, we’re talking about a large gel base, as well as a circle of adhesive silicone film and a suction cup, making sure it won’t go anywhere, no matter how bumpy the road is.

The holder has a high quality spring and two clamping ends, with non-slip silicone, which will hold on your phone securely, without letting it slide or fly out, if you make a sudden stop or accelerate. As a side note, the sticky silicone material won’t remain permanently on the dash, since it can be taken off with ease and become sticky as new right after. Oh, and it has a special design, which will keep direct sunlight from hitting your phone! 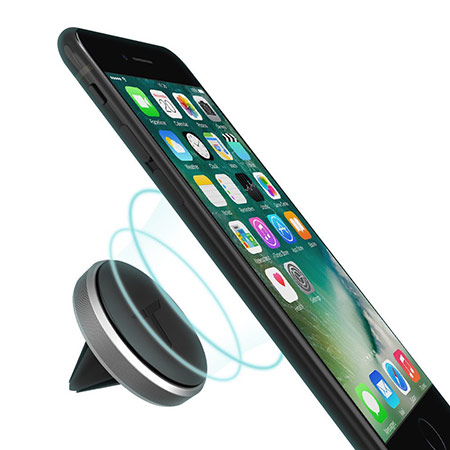 One of our favorite Samsung Galaxy Note 8 car mounts is the Trianium Magnetic Air Vent Mount, a premium model, featuring an aluminum casing that houses 6 powerful, heavy-duty magnets. There’s also a rubber base and a smooth surface head, able to hold smartphone 10 times heavier than other car mounts.

Despite being this simple, it’s a quality-built model, made with high quality materials and compatible with any phone case. It’s very easy to install and remove from the air vent, not to mention that it comes with a metallic plate, as well as a protective 3M film, so you won’t place it directly on the phone’s back. It weighs under an ounce and it’s fully adjustable, featuring 360 degree rotation. And it works as a kickstand, when you’re not using it in your car! 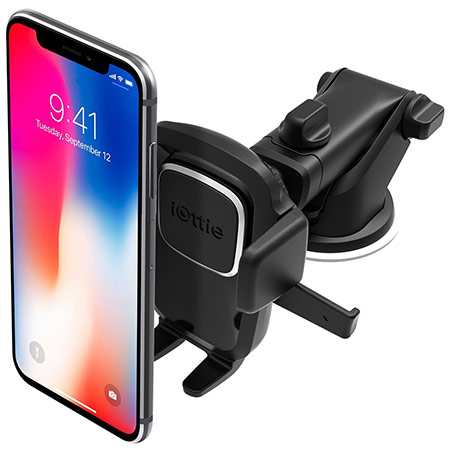 Next, we have the iOttie Easy One Touch 4 Car Mount, which is actually a universal model, with a telescopic arm, extending from 4.9″ to 8.3″, besides pivoting on 225-degree arc for a variety of optimal positions. Basically, it really doesn’t matter where you’re putting it. If it sticks to the surface, you can definitely find a way to adjust it!

The mount has an enhanced universal Easy One Touch mounting system, which locks and releases the phone with just a push of the finger. There’s a suction cup sticking securely to most surfaces, but it’s still removable. The pack comes with an adhesive dashboard pad, so you have an additional mounting method. 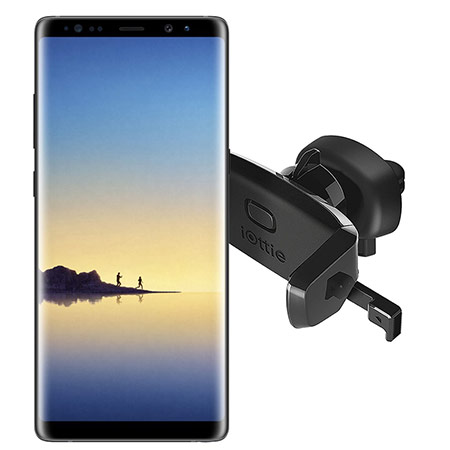 And we saved the best for the end: the iOttie Easy One Touch Mini Air Vent Mount. Yes, we know, it’s the third time this manufacturer is present in the top, but this model is way too good to be ignored. For those who don’t fancy using a magnetic mount and put that metallic plate on their phones, you can opt for this one, with a rotating cradle, rotating 360 degrees, for optimal viewing angles.

The mount is universal, actually, fitting smartphones even with cases on them, so it will perfectly fit the Galaxy Note 8. It has a spring-loaded one click lock and release feature, providing a strong clamped told to the car’s vent blade, while minimizing the vibrations on your device. Finally, on the back you can find a support guide that holds wires in place, for an organized charging.

And we’re all done, folks! These are some of the best Samsung Galaxy Note 8 car mounts, which will definitely come in handy, no matter how much you’re using your car. After all, safety primes! Unlike other times, it was very easy to pick our favorite model. And we guess that you already know which one it is…

Even though they’re very efficient, we’re not fans of magnetic mounts, but we still want a minimalistic model, so this was the natural choice. It’s small, it looks good and it does a great job at keeping your phone in place while driving. Not to mention that can help you keep your phone cool, which is great, especially during hot summer days.

But what about you? Which one of these models would you get for your Galaxy Note 8 and why? Let us know, by dropping a few lines in the comments section below!