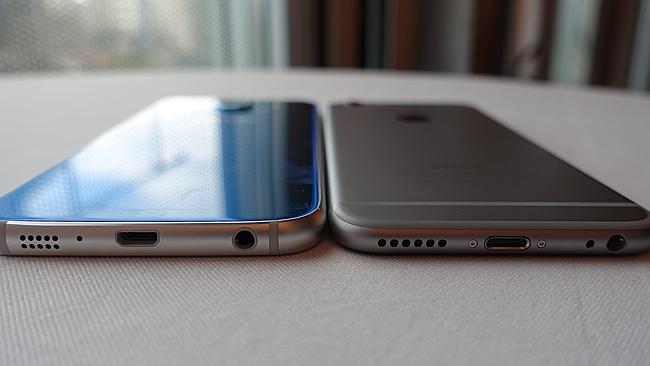 The biggest head turner at this year’s Mobile World Congress was undoubtedly the brand new Samsung Galaxy S6, the South Korean company’s latest flagship device. Now that it’s on the market their rivalry with Apple’s iPhone has once again heated up. While the iPhone 6 has had a half-year head start on the S6, which phone comes out on top today?

Samsung have finally addressed their critics and significantly improved the build quality of their latest flagship. This sees the S6 shed its predecessor’s plastic and upgrade to a premium metal and glass design that really does deserve to sit alongside the iPhone 6.

Atheistically the winner is going to come down to personal taste, but here are some vitals to help you make that decision:

Thickness is almost a straight tie, with the S6 measuring 6.8mm and the iPhone 6 measuring 6.9mm. However overall the S6 is slightly larger at 5.65 by 2.78 inches, compared to 5.44 by 2.64 inches with the iPhone. It is also heavier at 4.87 ounces, compared to the iPhone 6’s 4.55 ounces. If you’re a stickler for stats, this might mean something to you, but in the real world there’s no real advantage or disadvantage for either device in regard to their dimensions and weight.

We could give the S6 an extra point because it sports the new Gorilla Glass 4.

While the S6 has a larger 5.1 inch screen, with a 2,560 x 1,600-pixel resolution, and 577 pixels per inch, the LCD Retina display of the iPhone 6 is still impressive. It’s sharp and realistic in colors, and has great viewing angles.

The raw specs put it at 4.7 inches, with a 750 x 1334 resolution, and a pixel density of 326 ppi. The S6 is clearly better on paper, but unless you’re actively comparing them, the difference is not necessarily that significant.

We cannot downplay the S6 though, because it is better.

Apple have never been the most open regarding their raw performance specs, so we have to look to third party benchmark tests to really compare the two flagships. The Galaxy S6 is packed with a Octacore Exynos processor and 3GB RAM. There’s no lag or performance issues whatsoever. Tap an app and it will open instantly.

The iPhone 6 is powered by Apple’s A8 dual-core Cyclone processor, with 1GB of RAM, and PowerVR GX6650 hexa-core graphics. Again this clearly doesn’t measure up on paper, but Apple’s operating system and hardware are so finely tuned together, performance is much better than you might expect.

The crux of the debate often comes down to the operating system. Diehard Apple fans will always choose Apple, because they prefer iOS. Small differences in specs on paper, are not going to change this appeal, so long as they at least stay in the same ballpark as the Galaxy, which they do.

Where Android might have the edge in customization, it’s pulled down a bit by its bloat. iOS is more secure and consistent, but you have to be all-in with Apple’s services, because there aren’t any other options.

Apple continues its quality over quantity philosophy with its camera setup, once again only providing 8mp. However this is a high quality 8 megapixels, with all sorts of sensors and focus software. The S6 also keeps it’s predecessor’s base, with 16mp, though it has upgraded to smart optical image stabilisation and an f/1.9 wide-angle lens, for low light.

Samsung have a 5mp front facing wide-angle selfie taker, while Apple go with 1.2mp for its FaceTime camera.

The S6 can record 4K video, compared to the iPhone’s 1080p, but Apple have peaked our interest with 240fps slo-mo and time-lapse features.

With the Samsung Galaxy S6 closing the design gap, the debate over which device is better, is tighter than ever before. The S6 has the edge in terms of processing power, display, and camera setup, but not to a degree that will sway Apple fans.

The iPhone 6 remains an overall fast and smooth Apple experience. Both are formidable devices, in the same price range, so it really comes down to personal tastes.