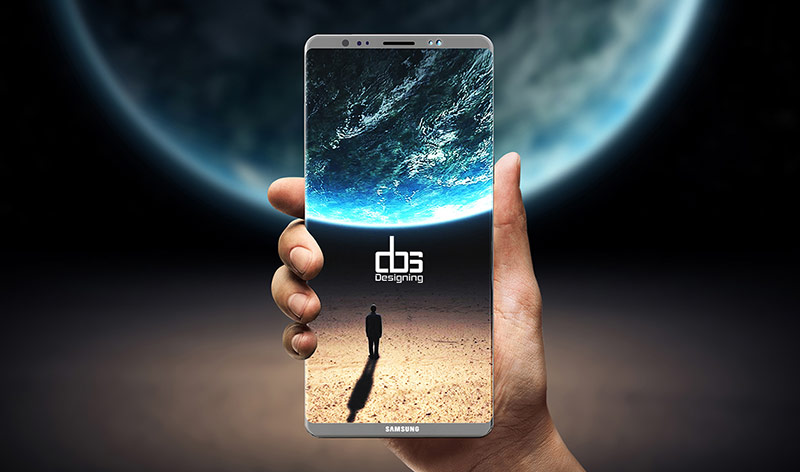 The Galaxy Note 7 is definitely a black page in Samsung’s history, but still, the South Korean manufacturer almost made everybody forget about what happened with last year’s phablet thanks to the Galaxy S8 and Galaxy S8+ duo, which turned out to be amazing smartphones. However, real fans never forget!

We must admit that we’re seriously looking forward to the Galaxy Note 8 as well, since it could be the handset that completes a trio of excellent high-end devices! Expected to be introduced somewhere around August or even September, during the IFA event, the Note 8 should be a very interesting choice for any potential smartphone buyer. But what do we actually expect to see?

Even though the trail is pretty cold, we still managed to gather enough information, no matter if we’re talking about leaks or just rumors, and put everything together. So, without much further ado, let’s see what the Samsung Galaxy Note 8 could bring…

From this point of view, we’re almost convinced that it will look a lot like the Galaxy S8, with just a few minor differences. To be more specific, we’re talking about a bigger body and a redesigned back panel. Also, the Galaxy Note 8 will have a bigger display, about which we’ll talk in a few moments, with small bezels surrounding it. Of course, let’s not forget that we’re talking about a phablet here, so it will be a bit difficult to handle with just one hand.

Confirming all these is a leaked render with the Note 8, which made the rounds online just a few days ago. And we can totally understand Samsung’s decision. If the S8 was so well received among consumers, why not use the same design, altered a bit, so it won’t look exactly the same?

As mentioned above, the display will be bigger than the one used by the S8, which measures 5.8 inches. And bigger than the S8+’s 6.2” panel! Ok, so this means that the Galaxy Note 8 has all the chances of becoming the smartphone with the biggest display ever released by Samsung, measuring 6.3 or 6.4” inches. As far as we can remember, only the Galaxy Mega 6.3, a mid-range model, was this big. However, let’s not forget about those very small bezels, present on the Note 8, so we can’t really compare the two models.

Moving on, we’re actually talking about a curved Super AMOLED display, with a resolution of 2960 x 1440 pixels and an aspect of 18.5:9, resulting incredibly crisp and clear images!

From this point of view, things are pretty clear: we’re going to have two variants of the phablet, one powered by Samsung’s own Exynos 8895 chip, designed for the European market, while the second could have wither the latest Snapdragon 835 chip, or the unannounced (and significantly upgraded) Snapdragon 836. We’re not saying that the Exynos isn’t a great chip, but we would be really curious to see that new Snapdragon in action.

Otherwise, the spec sheet could be completed by 4 or 6GB of RAM and at least 64GB of internal storage, expandable, through a microSD card.

Initially, some sources were pointing to a fingerprint scanner embedded in the display, but it doesn’t seem that Samsung has this kind of technology ready for using it on the Note 8. Curiously, a lot of reports are claiming that Apple somehow managed to put everything together and will have this technology on the iPhone 8! Keeping it short, it will most likely be placed on the back of the phone, but we really hope that it will be positioned way conveniently than on the Galaxy S8 series…

The Samsung Galaxy Note 8 will also feature IP68 certification, an iris scanner, the above-mentioned S Pen stylus and a battery with a capacity of at least 3500 mAh.

As for the operating system, we’re looking forward to seeing Android 7.1.1 Nougat available out of the box, with Samsung’s own TouchWiz on top. And since we’re speaking about TouchWiz, we should also mention an updated version of Bixby, the manufacturer’s digital assistant! Hopefully, this phone won’t have a dedicated button for this…

Samsung nailed it once again with the camera on the Galaxy S8, so we expect big things from the Note 8 as well. Rumors are pointing to a dual-camera setup on the back, with a 12 MP wide-angle lens and a 13 MP telephoto lens, able to offer 3x optical zoom. We know, this sounds awesome, but let’s just wait for a few more weeks, until more information about this is available. Remember, we believed the same thing about the S8 and S8+, considering this dual camera trend, but, in the end, they have a single camera on the back. An awesome camera, that is!

Let’s not forget about the selfie unit, which in Note 8’s case will be represented by an 8MP snapper, perfect for video calls and more.

Well, it’s pretty obvious that this model won’t come for cheap! When the Note 7 was introduced in the United States, it was retailing at around $850, while the S8+ is now available at around $824.99, unlocked. Putting all these together makes it pretty clear that the Samsung Galaxy Note 8 will be available for something around $900 or even more.

This is far from being cheap, but, in the end, you’re getting a premium phone for this money! And, probably, Samsung will sweeten the deal a bit, by offering a free microSD card and a Gear VR headset for each purchase!

And this wraps it up folks! This is everything we know so far about the Samsung Galaxy S8. It’s relatively early to talk about it though, so our recommendation is to take everything with a pinch of salt, at least until more information, from reliable sources appear.

Until then, we would like to know what you think about Samsung’s upcoming phablet! Would you buy one? Let us know your thoughts, by dropping a few lines in the comments section below!