So you’ve decided your iPhone no longer cuts it and you want to get a real camera. You’re in for an exciting journey. Upgrading to and SLR / DSLR camera will allow you to take much higher quality photos, while giving you more control over the process like a true photographer.

But which camera should you buy?

When you reach a certain level of quality it is often the lens that matters more than the camera itself. SLR and DSLR are both single lens, allowing you change the lenses as you wish. The core difference between them is that SLR uses traditional film and DSLR is digital. Of course, there are mirrorless cameras as well, but they are comparatively more expensive than the DSLR cameras.

Purists may prefer SLR because of the whole development process, but DSLR is more practical in terms of getting your shots on to the computer for further editing. It is the most common type of single lens camera today.

In terms of quality of the shots, there’s not necessarily a better option. It comes down to personal choice. Check our recommendation for best camera for low-light photography.

As a beginner you probably don’t want to break your bank account, but if you’re serious you’re still going to want something that does the job and has most of the technical features the pros use. With that in mind you’re looking at $400 to $500 price range if purchasing the camera brand new.

Here are our top 5 beginner DSLR cameras we think will help you take your photography hobby to the next level. 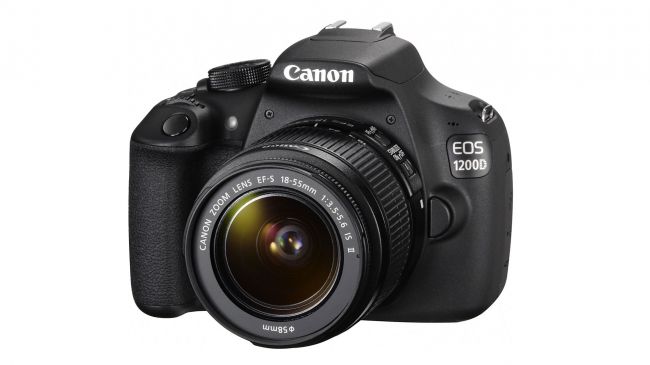 A cheaper alternative to Canon’s 100D is the 1200D. While the specs don’t quite stand up to some of the newer cameras on the market, it’s the definition of a solid entry level DSLR. It has an 18MP sensor, 3fps continuous shooting speed, RAW and JPEG file formats, and you can load up a beginners guide through its smartphone app to help you get the hang of things. It also shoots 1080p HD video.

The companion app that comes with the camera is great for entry-level photographers, and the quick focus feature is great for snapping off a fast shot as well. This means that if you have ever had issues with quickly bringing your camera up, focusing in and shooting an action shot, you won’t have to worry anymore.

The 1200D is definitely one of the easier to use cameras from Canon. From its great color reproduction, which makes sure that colors in your pictures are as similar to the real world as is humanly possible, to its decent price, it delivers great value for money and some lovely entry-level features and options that are simple to use and have almost no learning curve.

Where to buy: Check 1200D price on Amazon 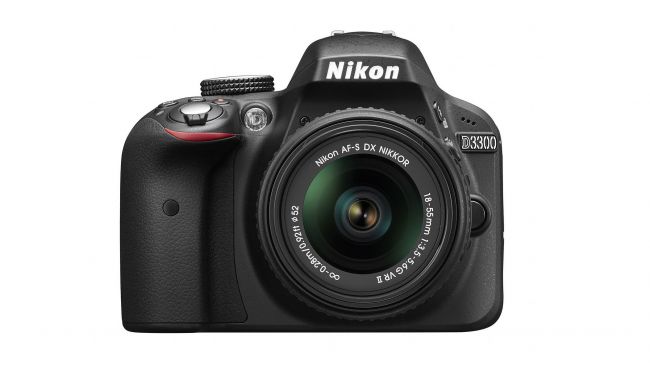 The older cousin of the D3400 is the D3300, which at around $100 cheaper is a better option for those on a budget. It lacks the retracting lens and anti-alias-free sensor, but at 24mp, 5fps speed, and 1080P video, it’s still a formidable beginner’s camera.
In fact, it makes use of a feature known as Guide Mode to help beginners to the D-SLR game to transition easily. We all know it can get a little difficult if you leap straight from traditional “point and shoot” cameras to the “big leagues”. The guide mode Nikon has on nearly all its cameras means you won’t ever have to suffer.

It has great picture quality, even at high ISOs, and is compact enough to pull out for a quick shot, meaning you won’t choke on action pictures. The video shot from the D3300 actually focuses continuously while shooting, which isn’t something you see on a cheaper camera and allows you to take crystal clear video with no trouble at all.

The features do outweigh the viewfinder, which is a little on the small side, and the fact that the LCD screen isn’t adjustable for different angles. Overall, it is a very versatile beginner camera with just enough to satisfy the needs of a professional too.

With a small learning curve and the ability to surprise you at every corner, it is one to consider picking up.

Where to buy: Check current price on Amazon 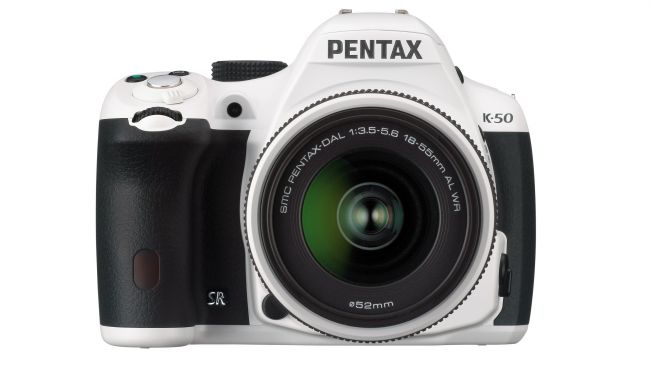 The Pentax K-50‘s main selling point is its weatherproof design, however it is also perfect for beginners and comes with great specs. It is very similar to its big brother, the Pentax K30, but has a couple of upgrades that turn it into something more desirable.

It has brilliant 6fps continuous shooting, a 100% field of view viewfinder, and Pentax’s patented Shake Reduction system. It’s pre-set filters, such as high contrast, allow beginners to see what the possibilities are before attempting advanced shots manually.

Pentax also continue their innovation of High Dynamic Range (HDR). It’s true RAW format means you’ll never have issues in photo editing programs either. This results in great quality for still images, especially if you plan on editing the photos you take on your computer later as well.

The 6fps shooting makes it a viable option for motion capture, if that is something you are into, as well — and the built-in stabilization allows you to take some pretty crispy shots — even with the jitters. We all know how it is when trying to shoot in a chilly bit of weather. Well, your shivers aren’t going to affect the image quality on this beast of a camera.

The best part is the weather resistant design, of course. Ever had trouble trying to keep your brand new camera out of the rain or the snow?

You won’t have to anymore because this thing is built like a tank. This makes the lack of continuous video recording autofocus a non-issue, because of its usability in the great outdoors.

Where to buy: Check out the price on Amazon 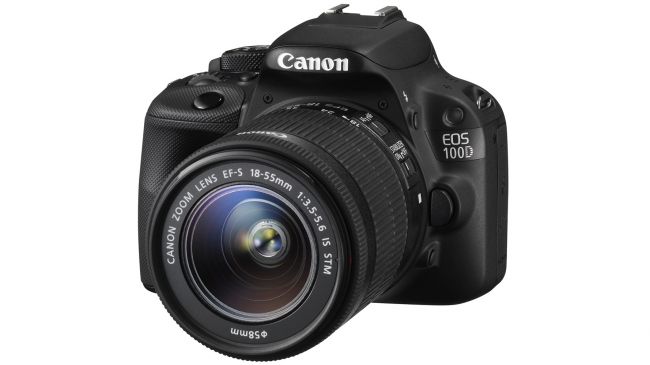 This Canon model holds your hand in the beginning until you’re more accustomed to how such cameras operate. It literally holds your hand too, by being one of the smallest DSLR style cameras on the market. If you have dainty digits, the EOS 100D has you covered. A lot of people have trouble holding on to the bigger cameras out there because of their sheer size. Not so with the EOS 100D.

This camera is accomplished with its Creative Auto mode that simplifies instructions for the layman and has several pre-set modes of shooting. Once you get the idea, you can then do everything manually. The learning curve doesn’t exist. All it takes is one quick browse through the manual, or a run through on auto mode. You can pick up all those advanced tactics on the go.

The 100D has both physical buttons and touchscreen technology, which is great for bridging the gap for those used to using smartphone cameras. It also allows for versatility when tweaking settings, zooming, and focusing on shots, leading to much better quality for images overall.

Ever wanted to adjust some focus points while shooting? Instead of using the physical buttons, you can tap on the areas of the screen to focus, just like you would on your phone.

There are air filters as well, although they are only usable in Live View, which can take a little too much time to focus in certain situations. It holds true to its promise of being special for the smaller-handed photographers out there, but as far as cameras go, it is still quite large.

Shooting at 4fps continuously with 18 megapixels, this is a nifty, desirable mid-level camera. If you are looking for a great little shooter for all your many needs, this is the one to go with.

Where to buy: Buy from Amazon.com 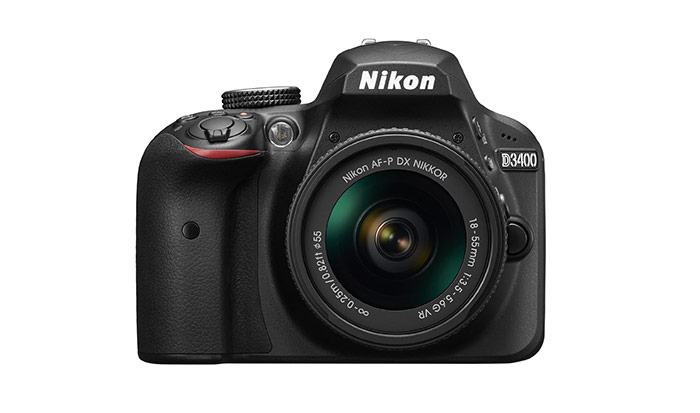 Our number one choice is Nikon’s D3400. This DSLR camera is particularly beneficial to beginners because it has a special step by step guide mode that will walk you through the various settings and how they apply them to certain types of shot. But just because it’s aimed at beginners doesn’t negate its quality.

With a whopping 24.2 megapixel count, EXPEED 4 processing engine, and a filterless sensor — you’re going to be taking some extremely detailed shots. It is a step up from the D3300, with a lot less noise in the new ISO3200 JPEG image format. This was a major problem for users of the 3200. If you really want crisp, crystal clear pictures that can be edited without compromising the quality, this is what you need.

Video looks really good, even in low light, and there is above-average color reproduction as well, especially in the RAW files. All of the many detailed colors you want seen on your videos is as close to real life as can be. For some vivid objects, it looks better than it does in reality.

The LCD screen has been upgraded to be more visible in sunlight, allowing for more outdoor shots with easier settings management. If you’re the person who had to cover the LCD with your hand in direct sunlight to be able to discern what is on it, that wouldn’t be the case when you own D3400. With the newly revamped LCD, you now get to view your work and settings in crisp high definition, even in sunlight.

It has the superb macro.

As a photographer, we love to take some close-up shots of anything we love — either it’s an insect or a flower — it’s important to get the detail of an object right that can be as little as a grain. At 55mm, D3400 out-performs its competitors with outstanding macro with sharp photos.

It also has a 5fps continuous shooting speed, 1080 HD video support, and its 18 to 55mm lens retracts to make it easy to carry around. The camera is also designed to be light, and has a comfortable grip that feels very stable indeed. No more having to put your camera down mid shot because your arm muscles are burning.

In addition to this, the design now incorporates the SD slot in the grip side, and not inside the battery bay. This is far more accessible, so you don’t have to take the battery out to put a new card in and miss valuable shooting time.

When you outgrow the automatic exposure settings, all of the required advanced options are there, allowing you to grow with experience.

Nikon dropped Wi-Fi capability in the new D3400 and replaced it with a feature called SnapBridge which allows you to share the pictures you took directly to the smartphones by installing an app.

If you do get the Nikon D3400, make sure you also buy a replacement battery and an extra charger, just in case you ever need one. It pays to be prepared after all.

You will also need a tripod, preferable a lightweight carbon fiber 60″. You can also get a great camera case, like the Case Logic case made for the D3400. If you find it too overwhelming to buy all these accessories from different suppliers, then you can grab a package that has all the things you need from the cleaning kit to the lenses.

While this camera is not the fastest, for a $400-$600 price range, this is the most suitable camera we’ve come across. You wouldn’t pay a thousand dollar more just to get a snappier models out there, which is why it makes it the best entry-level camera so far.