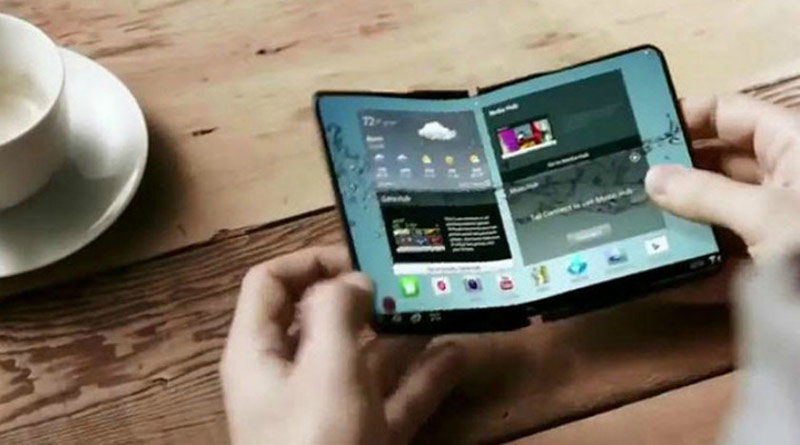 A few years ago, the market was still full of foldable smartphones. Don’t get us wrong, we’re talking about those clamshell handsets, which were basically anywhere, since smartphones with foldable display were still a thing of the future.

People were skeptical even when some manufacturers claimed that they’re planning to make phones with curved displays, but here we are, in 2017, when pretty much every reputed company has a model with a dual-edged display in its portfolio. However, today we’re talking about taking things to a whole new level.

That’s right, tech fans! We could finally see an actual foldable display this year, as a couple of manufacturers have reportedly filed patents for such designs. Even more, there are several rumors pointing to releases of such devices by the end of 2017!

Don’t miss: 7 Most anticipated smartphones of 2017

Until now, Samsung, Nokia and, recently, LG, have been the subjects of all kinds of rumors related to their plans regarding this crazy technology display (see what we did there?)

First of all, let’s take Sammy. It seems that the South Korean manufacturer is currently working on two different foldable devices, known as Galaxy X1, which could be announced later this year. And they seem to be very interesting, since the display could actually be placed on the exterior of a folded phone, allowing users to interact with it while the device is still folded.

The thing is that the company has already secured the fold-in phone technology, so it’s just a matter of time until they’re going to use it to manufacture devices for the masses. Speaking about this, they’re expected to make over 100,000 of them in the last quarter of the year, according to BGR, so, for the moment, we can only wait and hope that more details about this will be available soon!

Nokia is coming back in style

After making an impressive comeback, with a mid-range handset that exceeded all expectations in terms of popularity (and an absolutely impressive model in the works), Nokia is also planning to join the club.

The Finnish company has been recently granted a patent for a flexible smartphone, according to the Indian Express, citing PhoneArena. The device could have two identical sides, connected by a hinge, with a single screen, foldable in half. When unfolded, the device could have a relatively large display, reaching even 8 inches.

However, it’s a bit early to tell if any Nokia-branded device with a foldable display will be released this year, but hey, let’s not lose hope!

LG doesn’t want to fall behind!

Finally, let’s not forget about LG! The manufacturer just filed another patent for a foldable phone, but a bit different than anything we’ve seen until now, since it folds on the vertical side. Folded, it looks like a normal smartphone, but otherwise, it transforms into a tablet in Landscape mode.

According to GSMArena, the device could have some kind of controllers or notification bar on the bending side, while on the back, a camera could be positioned, alongside a flash, fingerprint  scanner, and, LG’s signature, the power buttons.

Unfortunately, there’s no information about a possible launch date, but looking at the graphs, this might be an extremely awesome device!

Ok, so we must admit that we’re really hyped about this whole ‘foldable display’ trend and we’re looking forward to seeing more and more images or hear details about smartphone manufacturers’ plans of making such devices real! And yes, we’re convinced that it will happen sooner or later, but hey, we’re tech fans, we want to see innovations as fast as possible!

What are your thoughts on this? Do you think that we need devices with foldable displays or they’re just a trend that will disappear quickly? Let us know, by dropping a few lines in the comments section below.