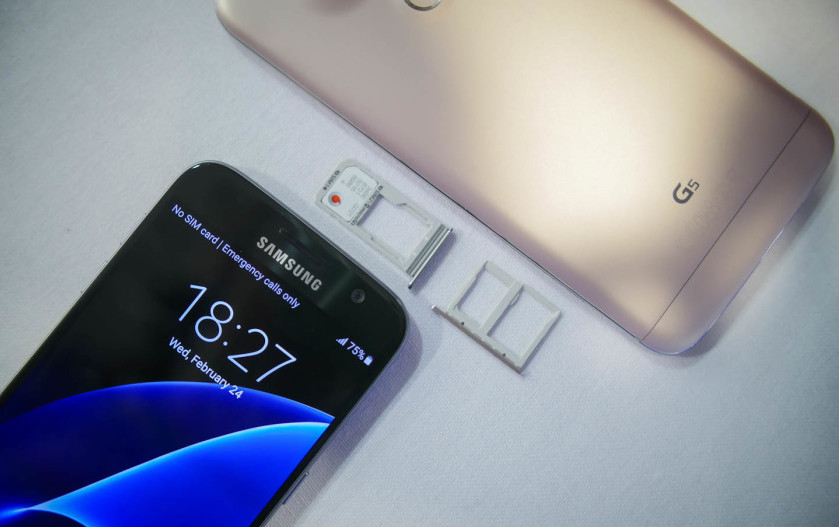 In addition to Mark Zuckerberg’s impromptu visit to Mobile World Congress in Barcelona this week to talk about virtual reality technology, we also got to see the unveiling of Samsung’s and LG’s latest products.

With Samsung’s Galaxy S7 and LG’s G5, many of our readers were left wondering which phone wins the prize when they’re matched head-to-head in a feature-vs-feature showdown.

And today, it’s Galaxy S7 and the LG G5. Is one even better than the other or are they basically the same phone? Let’s find out in this week’s mobile breakdown.

At a Glance: Design

When it comes to design, the Galaxy S7 is virtually identical to the S6 that Samsung released last year. The S7 consists of a slim, metal and glass combo with a fingerprint scanner on the front and a powerful rear camera that only slightly protrudes from the back of the case, which just a tad bit less noticeable than the S6’s rear camera.

The Galaxy S7 measures 142.4 x 69.9 x 7.9mm and weighs 152g, which a little bigger than its predecessor. The LG, on the other hand, has a strange but bold new design that consists of a full metal case with a power button located on the back of the device.

The power button also doubles as a built-in fingerprint scanner while the rear camera is located just above the power button and the volume controls can be found to the side of the phone. The LG G5 measures 149.4 x 73.9 x 7.7mm and weighs 159g, which is slightly bigger than the S7.

Winner: We can’t really say which design is better or worse than the other. It mostly comes down to your personal preference.

The Galaxy S7’s screen measures 5.1 inches and features an AMOLED display with Quad HD resolution. The rear camera is 12 megapixels while the front-facing camera is 5 megapixels and a wider aperture supports faster auto focusing.

The S7 is ideal for low-level picture taking and capturing fast-moving images in a hurry, such as scenes of passing city skyscrapers seen from behind the dark window of a moving car on a long road trip. The LG G5 measures 5.3 inches and features an IPS LCD display with a 2560 x 1440 resolution, putting the G5 in the lead over the S7 as far as the display is concerned.

Additionally, the G5 has a rear-facing camera that’s 16 megapixels with a built-in 8 megapixel 135-degree sensor capable of capturing a wider field of view that more closely resembles the natural vision of the human eye as well as an 8 megapixel front-facing camera for high-quality selfies.

Winner: The G5 clearly has a much more superior display and camera technology than the S7, the latter of which is actually a step down compared to the S6 released last year, which had a 16 MP rear-facing camera.

The S7 is available in both quad-core and octa-core models, the latter of which is thought to be run by Qualcomm Snapdragon 820. Since the G5 also runs on the Qualcomm Snapdragon 820 by default, we’re going to say that the G5 is automatically equal to, if not better, than the S7 when it comes to raw performance capabilities.

Both phones offer 4 GB of built-in RAM as well as 32 GB of internal storage, although the S7 is also available in a 64 GB version and has brought the use of microSD back, which has been disabled since the Galaxy S4.

The S7 has a built-in 3000 mAh battery that cannot be easily removed by the user. The G5 has a removable 2800 mAh battery that has a little less juice, but might be the better option for people who aren’t comfortable removing their motherboard every time the battery needs to be replaced.

Winner: This one’s a toss-up. While the G5 is at least as powerful as the S7, if not more powerful, the S7 offers up to twice as much internal storage, depending on which model you buy. However, the G5’s removable battery gives it a slight edge over the S7, which buries its battery deep within the heart of the machine.

Both the S7 and the LG will run on Android Marshmallow, though each company will tweak the experience to match their own brand’s perspective. The S7 will include a Games Launcher, a security software known as Knox, and Samsung Pay, which is Samsung’s latest wireless debit card app.

The G5 has opted for a quicker, simpler experience by stripping out the App Launcher altogether.

So which device is better?

While both phones have a great design, the LG G5 has a better display, a better camera, a more powerful processor, and a bare-to-the-bone software experience.

The Samsung Galaxy S7 supports more internal storage, depending on the model, and offers a variety of pro-Samsung apps built-in from the get-go.

Both devices are cool, but the G5 has definitely pulled out more shock and awe inspiration this year, while Samsung pretty much gave us the same thing it gave us last year.